The 22nd International exhibition of equipment, raw materials and technologies for pharmaceutical production, Pharmtech & Ingredients, took place on 10-13 November 2020 at Crocus Expo. The exhibition was organized by Hyve Group.

Preparations for Pharmtech & Ingredients 2020 were carried out in close cooperation with the pharmaceutical business community. Opening Pharmtech & Ingredients 2020, Vladislav Nikolayevich Shestakov, Director of the State Institute of Medicines and Good Practices of the Ministry of Industry and Trade of the Russian Federation, emphasized the importance of the event by saying that, “Today this exhibition is needed more than ever. The organizers took a responsible, principled and correct decision to hold it.”

Pharmtech & Ingredients 2020 saw participation of 181 companies. In addition to Russia exhibitors, manufacturers from 18 countries demonstrated their products and equipment. Companies from Italy, Belgium, the Czech Republic and other cjuntries were represented by stands, while Swiss and German manufacturers traditionally arranged collective expositions. In his speech at the exhibition opening, Lorenz Widmer, Director of the Swiss Business Promotion Center (Swiss Embassy), said, “We are pleased to support the event and we are happy to participate. And this year we managed to draw together companies of much interest.” 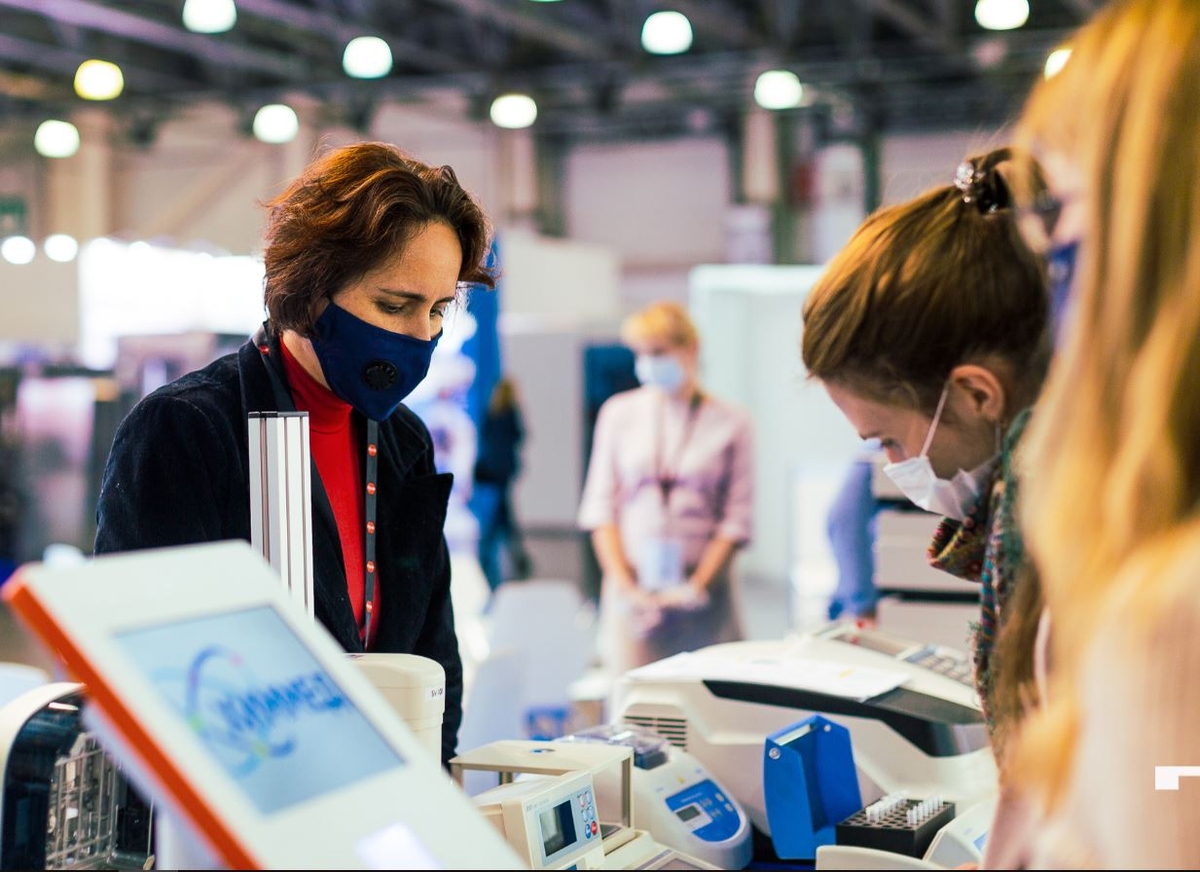 The exposition of Pharmtech & Ingredients 2020 aroused keen interest among pharmaceutical industry professionals. In total, the exhibition was attended by 2,811 specialists from 57 regions of Russia and 13 countries of the world. The geography of visitors has been almost completely preserved (62 regions in 2019). The exhibition was attended by representatives of the EAEU countries (Belarus and Kazakhstan). At the same time, the number of key visitors in search for new products, services and suppliers increased up to 74% (compared to 72% in 2019). The number of decision makers amounted at 67% (63% in 2019), owners and managers at 33% (31% in 2019). Thus, the exhibition confirmed its international status, and the total number of visitors was compensated by their increased quality.

Traditionally, Pharmtech & Ingredients 2020 was accompanied by the business programme, where pharmaceutical market experts discussed the most relevant issues for the industry. The content events events were available both on site and online; the total number of attendees amounting at almost 500 people.

The business program opened with the plenary session “Pharmaceutical and medical industry development" state programme results: together towards a common goal”. The session was moderated by General Director of GMP News Irina Novikova and Deputy General Director of OOO Immunotechnology Ivan Glushkov. The session was attended by Alexey Alekhin (Ministry of Industry and Trade of the Russian Federation), Vladislav Shestakov (State Institute of Medicines and Good Practices of the Ministry of Industry and Trade of the Russian Federation), David Melik-Guseinov (Deputy Governor and Minister of Health of the Nizhny Novgorod Region), Oksana Anatolyevna Monzh (Sanofi Russia), Dmitry Kudlai (General Director of AO Generium), Tigran Gevorkyan (Deputy Director of the N.N.Blokhin National Medical Research Center of Oncology, Ministry of Health of Russia), and Pavel Bogomolov (First Deputy General Director of Mother and Child Group of Companies ). In his speech, Aleksey Viktorovich Alekhin mentioned the effectiveness of the “Pharma 2020” strategy, due to which a wide range of drugs has become available in Russia today, and negotiations have been underway to create raw materials cooperation with foreign partners, as well as new solutions are being sought in the field of synthesis.

Oksana Monzh, General Director of Sanofi Russia, mentioned that, thanks to the implementation of the strategy, the industry was able to produce generics and biosimilars at an up-to-date level, resulting in many international companies localizing their production in Russia. For the “Pharma 2030” strategy, the key provisions will be to ensure the fully domestic production cycle of vital and strategically important drugs, the efficiency of dealing with defects, and increasing the responsibility of manufacturers. It is expected that the draft new program will be presented before the end of this year.

Another key event on the first day of the business program was the round table “API: how to set up production in Russia?” The session was moderated by Vadim Tarasov, Director of the Institute of Translational Medicine and Biotechnology after Sechenov. Among the attendees were: Alexander Semenov (President of Active Component), Irina Vendilo (General Director of the Roskhimreaktiv Association), Andrey Mladentsev (General Director of Promomed Group), Vasily Ignatiev (General Director of R-Pharm Group), Igor Narkevich (Rector of the St. Petersburg State Chemical and Pharmaceutical University). The speakers discussed the possibilities and prospects for domestic development and creation of required substances, and also highlighted key steps to eliminate existing problems and strengthen this segment in Russia. The final list of measures required for the development of the API production system in Russia included: quality training of personnel, export support from the state, industrial cooperation along the entire production chain, development and implementation of a new industry development programme, creation of an information exchange system, and development of own technologies and equipment in addition to final and intermediate products.

The increased attention of the audience on the second day of the exhibition was drawn by the round table “Peculiarities of waste management at pharmaceutical enterprises”, where the existing methods of the waste disposal regulation and company responsibilities were discussed. The key issues of the pharmaceutical waste disposal sector could be summarized as follows: ambiguous nature of legislative regulation of waste disposal and recycling, potential problems and lack of guarantees in appointing a single utilizer for the entire industry, shortcomings in the production design, as well as deactivating residual medications in recycled packaging. The session was attended by: Grigory Peglivanyan (General Director of FPT), Alexander Klimov (General Director of the National Ecological Company), Natalya Belyaeva (Deputy Chairman of the Committee for Waste Processing and Secondary Resources of Business Russia), Oleg Malakhov (General Director of PRIMEKEY Group of Companies), Pavel Savkin (Deputy Director of Merck Life Science in Russia and CIS countries), and Danil Dubo (environmental engineer at HELYX).

On the same day, the first session of the annual “Pharmtechprom” forum took place. The forum traditionally serves as a platform for presenting the latest technologies in pharmaceutical production. The first session “Raw materials and auxiliary processes in pharmaceutical production” was moderated by Oleg Spitsky, Biopharmproject. Georgy Khachiyan, General Director of Reatorg, delivered a welcoming speech to the forum participants. During his speech, Dmitry Brittal, Head of the pharmaceutical and cosmetics department at JRS Pharma, presented the company’s novelties. Renat Kashapov, Manager of pharmaceutical raw materials at Merck, spoke about the important aspects of the development and production of sterile dosage forms.

The second session of the “Pharmtechprom” forum took place on 12 November, focusing on equipment and technologies for pharmaceutical production. Sergey Staroverov, General Director of BioChemMac ST, described the main methods of organizing a continuous chromatographic process for the purpose of obtaining highly purified substances and isolating impurities. GEA presented their world's first three-in-one GEA flexChange concept specifically for pharmaceutical vaccine companies. The concept can be applied to a variety of pharmaceutical and biotechnological processes, primarily to produce active pharmaceutical ingredients and vaccines. Andrey Belov, Project Manager of Aurora, spoke about the standard quantitative characteristics of the TriPlus 500 Headsp autosampler. The second session of the forum was moderated by Natalya Pyatigorskaya, Deputy Director for Research, Sechenov University.

On the same day, a number of exhibitor seminars took place, including an event of the Swiss Center for Business Promotion in Russia, dedicated to the introduction of Swiss technologies in Russian pharmaceutical production.

Also, on 12 November the results of the annual Pharmtech & Ingredients award were announced, the laureates being 4 companies in the following nominations: Pharmtech & Ingredients 2020 was supported by the Ministry of Health of the Russian Federation, the Federal Service for Surveillance in Healthcare, the Russian Union of Industrialists and Entrepreneurs, the Association of Russian Pharmaceutical Manufacturers, and the Union of Professional Pharmaceutical Organizations.

With the support of:

In 2021, the 23rd International exhibition of equipment, raw materials and technologies for pharmaceutical production Pharmtech & Ingredients will be held on 23-26 November at Crocus Expo.